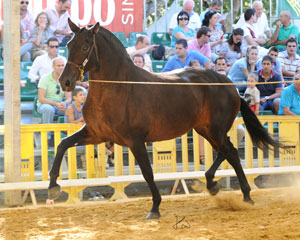 In Stud Molero Malo along these years of breeding, we managed to establish a number of features in our animals, which today make an animal easily recognizable from our iron.

Animals are brown or black layer usually animals good height and a large volume, good top line and powerful hindquarters, and we have selected our animals for their correction aplomb.

From the first moment we primacy that our animals to move, that work and serve them to the riders. We seek a racial movement, with knee action and hard in the posterior third, horses that push. 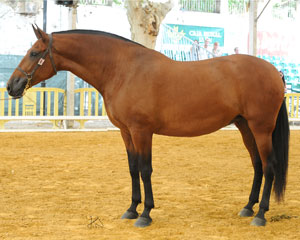 We horses capable but mentally balanced. With an excellent character but with a lot of heart at the time of labor. We have set a number of features that lead us to raise horses enrazados ultimately raise Purebred Spanish horses functional and beautiful.

In this effort, we selected animals that summarize the features described above and above all, cherish in their genes morphological-functional richness of their ancestors. We look at them whenever guarantee its recognized values ​​reported ancestry, who are none other than the quality of the Spanish horse.

All this, is based on two pillars inside our house. The first, a rigorous selection of our mares, based on the know-how livestock and results achieved over time. The second, in the conscientious choice of stallions with which we covered in our house. We have been clear at all times the way forward and we have not hesitated to rectify when the results were not as expected.

At this point, we are currently relying primarily on our two stallions brown. 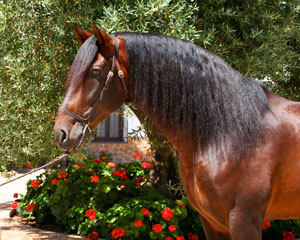 For one CHIQUILLO VI , iron chestnut stallion Don Jose Luis de la Escalera and with a lift of 1.72 m. Descended from two of the most functional lines of this iron, and have to UNDERSTAND VINATERO III XX and its origin. Along these lines, there have been several examples that have been competing at Grand Prix Dressage. Good example of this is FUN XXV, also DOMINANT son XVI.

CHIQUILLO VI has long been recognized in the morpho-functional competitions where he won a number of medals and several awards for the best moves and several Championships and Subcampeonatos of Breed. He earned a creditable fourth place in the Championship of Spain 2007 Colts section two years.

Son of Champion of Spain "Rodeo XI" and "Colombiana II", "Colombian X" is a direct descendant of the two most important genealogical lines today demanded "Lebrijano III" and "Albero II" grandparents "Colombian X "are the founders of two strains of functional and beautiful horses within the Spanish Horse.